You has everything I would want in a TV show on paper – Penn Badgley, beautiful cinematography, and a bookstore as a key set. But You‘s stalker/murderer storyline is awful and I don’t like it at all.

By this point, you’ve probably heard of/watched You. It’s the new ‘Netflix’ show – aka it’s a Lifetime show that Netflix picked up for season 2 and has thus rebranded as a ‘Netflix original’ even though no one at Netflix should get credit for greenlighting this phenomenon.

If not here is a well-written wiki summary:

“What would you do for love? For a brilliant male bookstore manager [Joe – played by Penn Badgley] who crosses paths with an aspiring female writer [Beck – played by Elizabeth Lail], this question is put to the test. A charming yet awkward crush becomes something even more sinister when the writer becomes the manager’s obsession. Using social media and the internet, he uses every tool at his disposal to become close to her, even going so far as to remove any obstacle –including people — that stands in his way of getting to her.”

I might describe it as a rom-com gone bad. A rom-thriller or a rom-horror.

In 2019 – I don’t need a rom-thriller. I need the rom-com. Aka I don’t want to watch shows with boys being creepy stalkers. I can watch that in the news. In the fictional world of tv, I want to hold out hope that maybe boys aren’t terrible people and that they are all much more like Peter Kavinsky.

I’m only kind of joking. 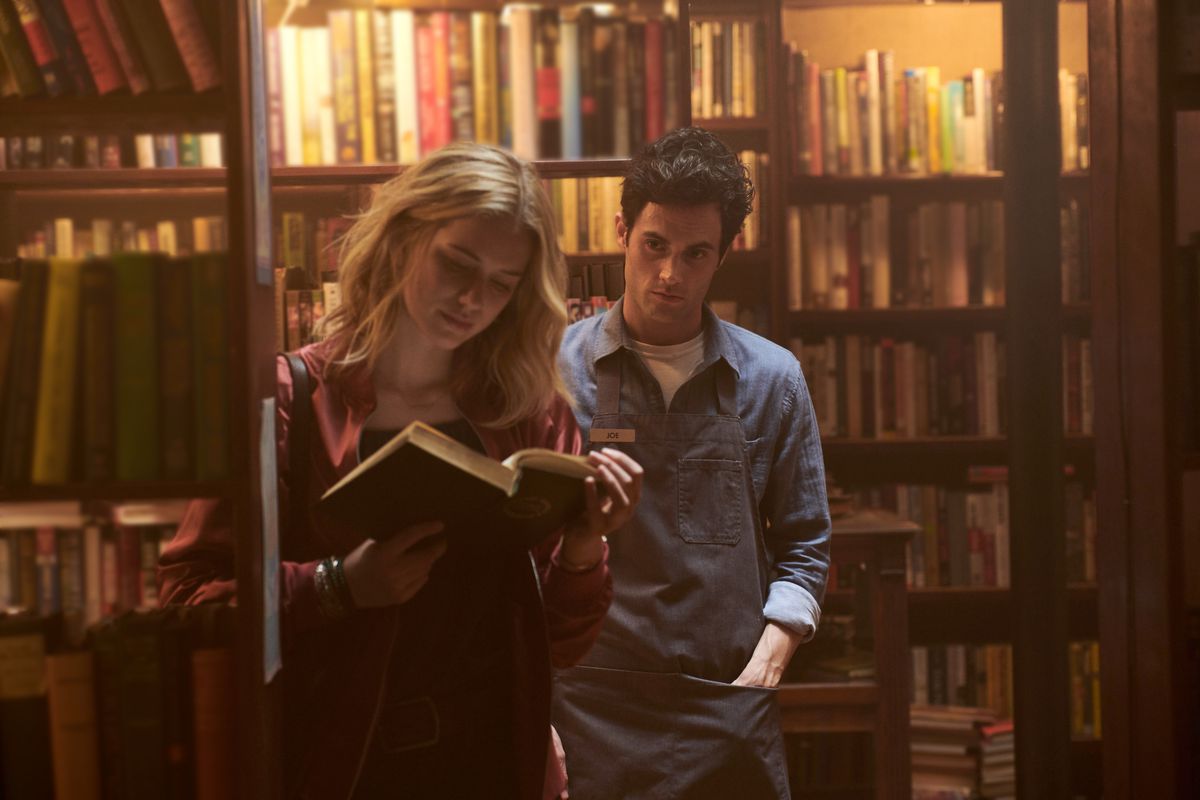 I’m really not into stories about boys being horrible. I’m frustrated with the trend of telling stories about men being terrible people.

I’m thinking about all the shows I’ve recently watched or known are coming out soon on Netflix: You, Conversations with a Killer: The Ted Bundy Tapes, Dirty John etc.

These shows all focus on sociopaths who kill women. Personally, I don’t think violence against women is entertainment and I always feel weird after watching them.

Sure – they are compelling. I watched them. I needed to know what happened next. It’s car wreck tv – you can’t look away.

“What do girls like? True crime and Zac Efron. Let’s do this thing.” –@KarenKilgariff https://t.co/rmaZcMGySu

I know that I’ve loved shows about topics that others can’t stand (for example, 13 Reasons Why). Shows that focus on social issues (like mental health and gender-based violence) will never be perfect in the same way that medical shows will never be perfect. It’s television – and artistic liberties will be taken.

I think the difference for me between You and other shows that have violence as a central element is the position of the main character of the show.

A word like ‘antihero’ would be a good description of Joe, but it’s a major tv turn off for me.

You focuses in on Joe and is mainly told from his perspective. A show like Law & Order: SVU (which I love) also has gender-based violence – but it’s told from the ‘good guy’ Olivia Benson’s point of view. The narrative is more focused on the criminal justice system and the victims rather than on the perpetrator.

Everyone in my life told me to watch You.

I should have loved this show.

On a technical level – I did. The producers did everything right.

I mostly loved Gossip Girl and Pretty Little Liars (until they went on too long). I loved Penn Badgley and Shay Mitchell.  I watched Gossip Girl and Pretty Little Liars when I was in high school and the shows were about high school kids, now I’m watching You as a twenty-something and the show is focused on 20-somethings. It feels like Penn Badgley and Shay Mitchell aged with me and I’ll always love them.

Casting Elizabeth Lail also seemed like a smart idea. Paired with Badgley our core couple is very ‘of 2018’. Beck and Joe feel like Betty and Jughead ‘the tv it-couple’ right now. She’s a stereotypical blonde with a deeper side and he’s a little weird. However, I ship #Bughead. I hate Beck and Joe.

The writing isn’t even that bad – it’s just the core storyline that drives me crazy.

Everyone kept telling me to ‘give it a chance’ – and I kept watching it, but the show just got more and more and more ridiculous as it went on. Most importantly – Joe’s controlling behaviour made me livid.

I don’t have time for this in my tv life.

You know what else I don’t have time for…

NETFLIX claiming that this is a ‘Netflix Orginal’. Liars.

You was originally commissioned by Lifetime. Lifetime has a team of people who know what good tv is. Besides You, they’ve commissioned UnReal, Mary Kills People, and of course – Dance Moms.

You has found a crazy large audience on Netflix – but Lifetime isn’t getting the credit.

This is not a new problem. When Bodyguard came out and Netflix claimed it (it was a BBC Orginal) – The Guardian wrote a great think piece about this issue:

“There will be those who say this doesn’t matter. The way in which we watch TV is changing and network television is dying. In this scenario Netflix is the future, the place where one day we will all watch all our TV and resistance is futile.

They’re probably correct, and yet it’s hard not to feel frustrated when people talk about the innovative E4 series The End of the F**king World as a Netflix show, or praise them for The Good Place, which was originally made by the US network NBC. Both shows are inventive, unusual and represented a genuine commissioning risk for their original channels. Netflix shouldered none of that risk, instead sweeping in with their millions once the plaudits had come.”

For the average person, a show on Netflix makes it a ‘Netflix show’. But people in the media industry should know better. When Vanity Fair gave Netflix kudos for Schitt’s Creek (credit that should have gone to CBC/Pop), CBC’s execs were rightfully angry.

Schitt’s Creek is a great example of how Netflix can help a show. Vulture did a whole piece about how Netflix helped grow the show’s audience that you should all read.

I love having shows on Netflix – I just don’t want Netflix to get the credit unless it deserves it. Seeing You branded as an original annoys me.

Will I watch season two of You – nope.  However I do think this tweet is funny:

joe: break up with your girlfriend, i'm bored
benji: pic.twitter.com/97CrC5nMWR