Lilo’s back and she’s just a little bossy.

Let me introduce you to your new favourite trash tv/guilty pleasure. Lindsay Lohan’s Beach Club is a reality show about Lindsay being a #girlboss at her club in Mykonos, her outrageous money-hungry business partner Panos, and a cast of American 20somethings Lohan brand ‘ambassadors’ who are clearly here to become influencers.

If you are anything like me – you grew up with Lindsay, and you probably grew up loving her. The Parent Trap is one of my all-time favourite movies (shoutout to director Nancy Meyers for making it so iconic). Mean Girls defined our generation. Rounding out her teen career with Freaky Friday – you’ve got the lilo late 90s-early 00s trifecta.

Then as we all know… shit hit the fan.

She got suck in a vicious circle with the paparazzi. Club nights, toxic relationships, DUIs, rehab, jail time… the Lindsay gossip cycle was crazy.

Then she just disappeared for a bit. Lindsay moved to Dubai and got out of the California scene. She’d pop up with a weird comment (her approval of Harvey Weinstein for example) and/or with a weird accent.  Then she’d slip away again.

Well now she’s back and we all get to watch her attempt at a comeback.

I’ve seen TWO episodes and I’m here for it.

I’m going to be clear here – this is not me laughing with them, I’m 100% laughing at this show. It is a ‘so-bad-it’s-good’ show. I don’t think Lindsay knows how trash it is – but that also makes it that much better. The producers do – and they have given us all the things needed to stir the pot. 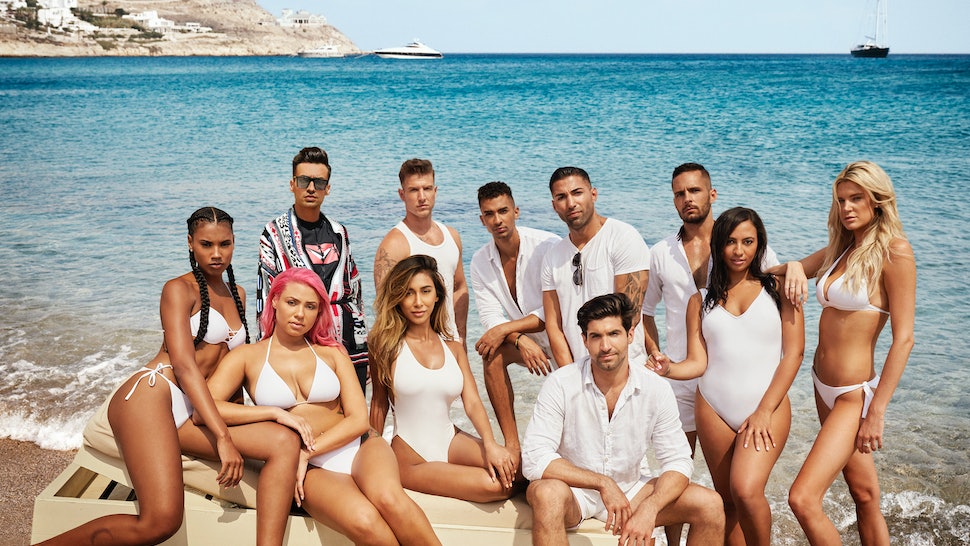 Panos is the cutthroat business partner. This is a man cares about money and that’s it.  I kid you not that he describes Lindsay as his family “right now.” Aka while they are on TV together and he can make some $$$. I’m hoping Panos has some redeeming qualities beyond being a love-to-hate person. That being said… he’s really crushing the love-to-hate type.

As we are told many, many, times Lindsay is the nice one and Panos is cutthroat. Apparently, she can be difficult but they’ve put aside their differences and now they are ruling the Greek club scene together. It’s an odd power couple – but again, I’m here for it.

Then we’ve got our “VIP hosts aka ambassadors of the Lohan brand.” A group of ridiculous American influencer-wannabees who are all here to make money and find ‘love’. They are mostly insufferable but we do have a few gems.

We’ve got Mike a bartender from West Hollywood. He’s blonde, bi and going to be a lot of fun. Iconic line from the pilot: “I’ve woken up in celebrities’ beds before.”  I also like that he knows this is trash. Upon entering the club for the first time he acknowledges that the people around him are very chic and he is “trash.” This makes me like him that much more.

Julia is VIP hostess/model from Denver. She’s tall and blonde and I’m pretty sure she’s a bimbo… She and Lindsay do not get along, probably because Lindsay wants desperately to be the pretty one and Julia might take that crown. She has done fewer drugs and it shows… #sorrynotsorry.

Brent is an extremely cocky VIP Host from Los Vegas who is all about money. He is the most insufferable of the insufferables. This pretty much sets up his personality: “I’ve been let go of a job because I was sleeping with all the waitresses.” Another way of putting this comes from one of the girls, “Brent has ‘fuckboy’ tendencies.”

Sara is a VIP hostess from Los Angeles with Pakistani roots. She immediately attracts the attention of multiple guys and is also someone who intimidates Lindsay, “If she has more makeup on than me she’s fired.” I actually like Sara – but I know full well this is only because she is less insufferable than the others. I like her one-liners:

Aristotle is a Bartender from Los Angeles. Lindsay sums him up nicely, “He looks a bit like a Greek God.” I like this guy in a genuine way. He seems like a solid person. I want him to make his money and find a girl to settle down with. I’m rooting for him.

Billy is also a Bartender from Lost Angeles and is unremarkable. He seems nice enough. He describes bartending as, “essentially a therapist” for his clients.

Lindsay wasn’t sure if she’d keep Aristotle or Billy – so she flips a coin and keeps them both. That’s not how a flip works but you know, it’s her show.

We’ve got hot mess Gabi. A VIP waitress from Washington, DC who describes her typical workday as dancing on bars and taking shots. She is forced to die her hair a different colour in the pilot and this would have made us sympathetic towards her if she wasn’t so annoying in the first episode. I have faith she’ll turn it around – but I also have faith that she’ll continue her hot mess persona throughout the show. #GoodTV

Jonitta is a VIP hostess from Los Angeles. She’s constantly going on about how hard-working she is. She also describes her work as this “I show up with good vibes, good energy, and I literally get paid to look cute.” So yup. #hardwork. I also think she’s specifically here to stir up some drama and start fights when people suggest she’s not hardworking.

Our final member of this crew is May. A VIP Hostess from New York. She “definitely flirt with the clients.”  Lindsay takes one look at her and says, “It looks like she wants to be one of the Jenners.” I also like that Lindsay describes her as a Jenner rather than a Kardashian. This says a lot about her.

The cast is all single so you know some of these people are going to hook up and we’ll get some showmances.

In summary, pluralize and apply this gif to the whole cast:

They’ve set all these folks up in a generous house with booze and a pool and hope the shenanigans will be good TV. The producers poke the bear by only giving them comically MASSIVE bottles of booze and by bringing Lindsay by whenever the kids are sufficiently smashed.  There is lots of yelling and it’s reality TV meat and potatoes.

What gives this show an edge is that it’s set in Greece and Greece is extremely pretty without even trying. The shots of the beach are killer and make me want to go to Greece. The camera team had a lot of fun filming B-Roll for this one – there are lots of bum shots as girls in bikinis dance and swim at the club.

The episodes have a very similar pattern developing. Each week Panos gives a speech about how he needs to make more money and how everything is all about the money. They talk about the specific VIP client coming in that day and ‘assign’ someone different to manage them. The job is to do whatever makes this client happy.

These clients seem to roll in without friends and need 110% of their hosts’ attention. There are constant threats that this experience will make or break them. That they will be judged on everything.

Week one Brent does whatever makes his client happy and makes out with her. Panos is thrilled – he made a lot of money. I kid you not this is verbatim what he says “You don’t have to fuck the clients – but you sold the most so [shrugs], in the end, it’s all about money.”

Again, in week two Aristotle washes his client’s feet. Again Panos is thrilled because… Aristotle made money come in.

Meanwhile, the rest of the ‘ambassadors’ find some reason to start the drama. Of course, the only way to solve this drama is to complain to Lindsay.  She gives some “nurturing advice” and maybe stirs the pot a bit all while lounging in her cabana. The drama obviously spills back into the house and they all yell at each other.

I wasn’t sure if ‘sharing our stories’ was going to be pilot filler – but we’re still getting tidbits about their ‘journeys’ into the second episode. I think the ‘Journeys’ theme will be a constant because Lindsay has been on a journey.

There are lots of talking heads discussing how far she’s come. Every cast member has been interviewed about much her struggle impresses them. We are constantly reminded about her past life as an idol and how she’s been through “so much” since then.

Now, she’s taking it all back and becoming a “boss.” The theme song is one of her songs. She desperately wants to be Lisa Vanderpump.  This show is 100000% self-promotion but that’s ok. As long as we all know why we’re really here… Come for the comeback/rebrand – stay for the fluctuating accent.

Watch the pilot here – and the rest of the season as it comes out on Tuesdays on MTV.

1 thought on “Lindsay’s Beach Club aka my new obsession”