Shondaland has given us a new lawyer show and it’s solid.

I’m loving this mid-season premier season. So many good shows are coming out and For The People is no exception:

For The People is about young lawyers cutting their teeth as a public defender or prosecution in New York City’s Southern District of New York (SDNY) Federal Court, also known as “The Mother Court”.

It’s a great setting as this court is historically famous. You’ve got the injury and loss of life claims from the sinking of the Titanic, the Rosenberg trial, and where the US government tried to enjoin the New York Times from publishing the Pentagon Papers. Recently, this was the court that sent Martha Stewart to jail and the court heard the NFL’s deflate-gate. So we’re talking big-deal cases which equals good tv.

Besides our compelling setting, we’ve got a cast of compelling characters.

Our cast is split into two departments – public defenders and prosecution.

On the Public Defender’s side we’ve got:

Sandra Bell (Britt Robertson), Allison Adams (Jasmin Savoy Brown) and Jay Simmons (Wesam Keesh). It wasn’t always supposed to be this cast. They reshot the pilot adding in Britt Robertson and Jasmin Savoy Brown. I’m really glad they did that because this works really well. I really like Britt Robertson – she’s got that x-factor you need to carry a show. Her character is earnest but not annoying – and it’s believable that she’s fresh to the lawyer game. Sandra’s friendship with Allison is also a highlight of the show. I love their banter and dynamic. It’s really lovely.

Lastly, Jay is a straight up gem. You can’t help but love him. He’s got this quirky nerdy side that is so endearing. He might be comic relief, but this character had depth and I cannot wait to see where he goes. 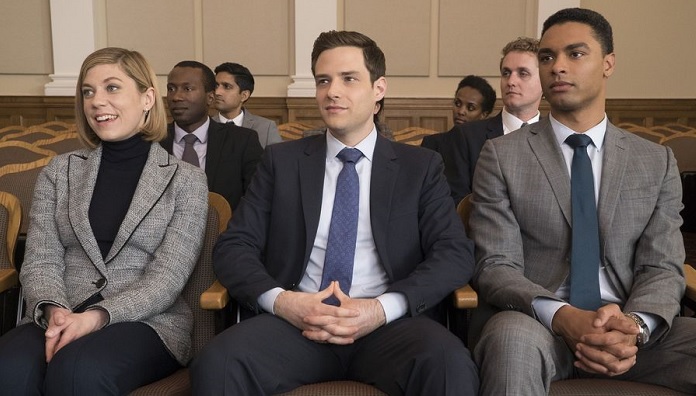 Meet Kate Littlejohn (Susannah Flood), Leonard Knox (Regé-Jean Page), and Seth Oliver (Ben Rappaport). Kate is the Paris Gellar of For The People. She is the hero to all A-Type personalities everywhere. She might come across harshly however, I think she might turn into my favourite character on the show. Leonard, on the other hand, is the rich boy who got his rank thanks to nepotism and thus is my least favourite character. 20 bucks he hooks up with either Allison or Sandra. Seth is Allison’s boyfriend.. but not for long. He’s doesn’t seem to be at the same level as everyone else. Smart, but not the smartest. His character is the least interesting in my opinion – but I could be wrong. Average can be very endearing.

Plus there a bunch of adults who tell these kids what to do.

Assistant US Attorney Roger Gunn (Ben Shenkman),  head public defender Jill Marcus (Hope Davis), Clerk Tina Krissman (Anna Deavere Smith) and Chief Judge Nicholas Byrne (Vondie Curtis-Hall).  I like that Jill and Roger are friends and go to Yankee games. I like that Jill motivates her team with sports analogies. I like the slightly exasperated, slightly sassy attitude of Ms. Krissman. I don’t have a read on the judge yet – but that will come.

I think what sets this show apart is that it feels a little bit more earnest, a little less crazy storylines of workplace hookups and ridiculous murders. I left quite a few of the Shonda shows because they got too crazy. I’m optimistic that this show will have its drama, but will remain more relaxed.

Because let’s be real – at the core, like Shonda.

This is show number 8 for Shonda – after Greys, Private Practice, Off the Map,  Scandal, How To Get Away With Murder,  The Catch and Still Star-Crossed.

Shonda is a pretty badass lady. I read her Year of Yes book while travelling this past fall and really liked the philosophies she was pushing.

She’s the kind of woman who motivates me to want to watch her shows because I want to support her. I don’t always like her shows, but I’ll watch them to give her some views and by extension some power. I want more shows that are lead by women – by women of colour. I want to support women who support other women. I want those traits to be passed along to other showrunners.

We need more women like Shonda working in the TV industry.

I just need her to not be so dramatic. That’s all I’m asking.

For The People airs on Tuesdays at 10 on CTV